Today on the blog, we will like to celebrate a beautiful and awesome 56 year old Sickle Cell Warrior who is a mother of three, her name is Abimbola Edwin. 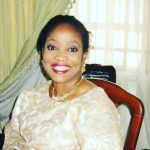 Let’s tell you a little story about her. Almost 30 years ago, she discovered she was pregnant for her boyfriend (now husband).  Everyone told her to abort the pregnancy. This was at a time medicine had not really advanced and it was believed that only a few women with Sickle Cell could go through the childbirth process and come out alive. Nobody ever gave her a chance of surviving childbirth or living any much longer. Let it be mentioned here that she had been jilted by several men who were AA before then because of her Sickle Cell condition.

With the promise of motherhood, she went against all odds and decided to have, nurture and care for the baby. Her boyfriend as well decided to take responsibility and marry her. Her boyfriend at that time didn’t know his genotype but after running some tests, they discovered he was AS. He decided he was going to stay by her and care for her even if it meant not having anymore babies.

When the baby was about 5 months old, she started seeing sickle cell traits in her and decided to run tests to find out her genotype. Her baby  was also Sickle Cell. This broke her! She met with the Lord soon after. She prayed earnestly and constantly that God will keep the baby for her, help her raise the baby and prevent her from having anymore sickle cell children. God answered all her prayers. Today, that baby girl has grown up to be the co-founder of Crimson Bow NG, among many other things. Her other two children are AS.

Being Sickle Cell herself, raising a sickle cell daughter was not easy. She has faced criticism and condemnation countless times. People have judged her! They have asked her how and why she could be so careless and inconsiderate in birthing a sickle cell child. She has ignored her pain several times to care to her daughter’s pain. She has had to deal with watching her daughter in all types of pain. She instilled the fear of God in her and also ensured she becomes an overcoming fighter. When her daughter is ill, she can tell the difference between when her daughter is crying due to physical pain or when she is crying as a result of self pity. She helps her snap out of self pity very fast. She has gone far and wide to get drugs that will help ease the pain of her child.

Due to her experience as a care giver of a Sickle Cell warrior she is drawn towards and has helped many young mothers who have sickle cell children.

Her daughter Timi Edwin, age 29, is constantly asked if she blames her parents for her condition to which she always answers NO! She is grateful for being given the chance to live many years ago when she could have been terminated and is also grateful for her upbringing and many sacrifices her mother has made on her behalf. She is the strong, ambitious, caring person she is today all thanks to God and her Mother.

Happy birthday Mrs Abimbola Edwin. Thank you for being an wonderful advocate of the CrimsonBow NG (Sickle Cell) cause. We love you!

For mothers out there who have Sickle Cell children, don’t ever blame yourself. Though we are campaigners of ending sickle cell in this generation, we also realize that nothing in this life is black or white. Things happen for a reason. Do the best you can in raising your child(ren) right. If you will like some counseling from this woman, send us a message and we will link you up with her.

CrimsonbowSci 0
Representatives of CrimsonBow Sickle Cell Initiative were invited for an interview at Hi-Impact TV to talk about ...