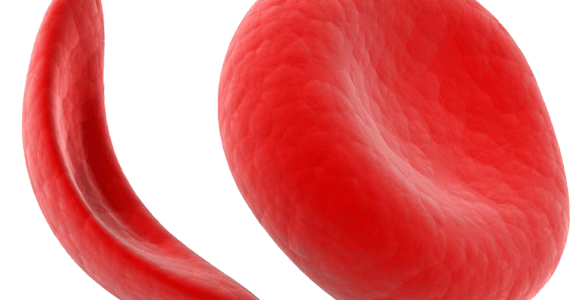 What You Need To Know About Sickle Cell 2

Abnormal forms of hemoglobin cause red blood cells to develop a sickle shape.

Sickle cell is a genetic disease meaning it can only be inherited; it is not contagious.  A person will be born with sickle cell disease only if two abnormal hemoglobin genes are inherited. That is: one sickle cell gene from the mother and one from the father.

Inheriting one HbS gene and any other abnormal form of the hemoglobin gene will result in sickle cell disease.

Sickle cell disease results when there is a mutation in the hemoglobin gene. A mutation is an accidental change in the structure of a gene resulting in a variant form of the original gene, which may then be inherited by future generations. Mutations can lead to missing or malformed proteins, and that can lead to disease. This is the case in sickle cell disease (SCD).

Sickle cell disease is a recessive genetic disorder. Its being “recessive” means that in order to have the disease, two copies of the mutated gene must be inherited (one from each parent).

The diagram below relays the effects of the abnormal hemoglobin present in sickle cell disease on the body:

Spleen: an organ that purifies the blood and stores red blood cells. It also helps the body to fight infections.

Gastrointestinal (GI): this refers to the digestive system- the stomach and intestines.  The GI system is responsible for consuming and digesting food, absorbing nutrients, and expelling waste.

Rheumatism: diseases that cause pain and stiffness in the joints, muscles, and connective tissues

Connective tissue: supports, separates, or connects organs in the body.

Fibrosis: the formation of excess fibrous connective tissue in an organ or tissue

Dilation: to expand, to stretch, or to become larger

A person who inherits only one copy of the abnormal hemoglobin gene is said to be a “carrier” of sickle cell disease OR has the “sickle cell trait”.

A sickle cell carrier will not under normal conditions exhibit symptoms of the disease. Carriers are healthy and can live long, normal lives.

However, under extreme conditions, a carrier may experience a pain crisis. (This is not very common).

Conditions that deprive the body of oxygen (hypoxia). For example, excessive and vigorous exercise at high altitudes.
Conditions that result in excess acid in the body fluids (acidosis)
Low body temperature resulting from the loss of body heat at a faster rate than the body is able to produce heat (hypothermia)
Dehydration
Scientific studies have supported the finding that being a sickle cell carrier provides a protective advantage from malaria. Sickle cell carriers have a biological advantage in that they are protected against malaria (P. falciparum).[1]

Hemoglobin is the oxygen-carrying molecule in red blood cells. Hemoglobin is made up of 2 alpha chains and 2 beta chains. These chains are made by the alpha and beta genes. Different types of sickle cell disease occur as a result of different mutations in these genes.

Sickle cell SS occurs when a person inherits one HbS gene from the mother and another HbS gene from the father.
Sickle Cell SS is the most common type of sickle cell disease accounting for 65% of cases in people of African origin.[2]
Most SS sufferers tend to experience severe symptoms including frequent pain crises, chronic anemia, and multiple organ dysfunction.
Sickle Cell SC (HbSC)

Sickle cell SC occurs when a person inherits one HbS gene from one parent and one HbC gene from the other parent.
Sickle cell SC is the second most common form of sickle cell disease accounting for about 25% of cases.
SC sufferers tend to experience fewer pain crises, and milder anemia than SS sufferers
SC sufferers however experience more significant bone degeneration(deterioration and loss of function), retinopathy (eye damage), acute splenic sequestration (trapping of sickled cells in the spleen), and increased risk of experiencing priapism (a painful erection that occurs without sexual stimulation or arousal, which may result in impotence if not treated. Priapism occurs when blood vessels in the penis are obstructed by sickled cells).
A person who inherits only one HbS gene or only one HbC gene is said to be a “carrier” and does not have sickle cell disease.
However, HbC carriers are more prone to anemia, and eye and hip complications later in life.
In Nigeria, the HbC gene is largely confined to the Yoruba people of the South West in whom it occurs in about 6%. It is very rare among the Igbos of Eastern Nigeria. [3]
The incidence of the HbC gene however, is highest in Northern Ghana and Burkina Faso.[4]
Sickle Beta Thalassemia (Sβ)

Sickle cell SE occurs when a person inherits one HbS gene from one parent and one HbE gene from the other parent.
Most SE sufferers have mild to moderate anemia (low blood count). Although this does not cause serious symptoms or problems.
Sickle cell SE is most common in Southeast Asian populations.
Some SE sufferers have little or no symptoms. Sickle cell SE tends to be milder than SS and SC- even though SE has a higher concentration of sickled cells than SC. [5]
However, under certain conditions such as exhaustion, oxygen deprivation (hypoxia), severe infection, and/or iron deficiency; some mild to moderate anemia, pain crises, gallstones and pulmonary hypertension (high blood pressure in the lungs) may occur.
The spleen in younger children with HbSE may be somewhat less effective in removing bacteria from the blood, thereby leading to a higher risk of serious blood infections.
Younger sufferers will often have an enlarged spleen. However, teenagers and older sufferers may experience splenic crisis (pain over the spleen and a sudden drop in blood count).[6]
Over time, SE sufferers risk damage to the retina.They should be seen regularly by an ophthalmologist (an eye doctor).
Sickle cell SD (HbSD)

Sickle cell SD occurs when a person inherits one HbS gene from one parent and one HbD gene from the other parent.
SD sufferers may experience any and all sickle cell symptoms ranging from mild to severe.
Sickle cell SD is relatively rare.
Sickle Cell SO (HbSO)

The severity of symptoms may vary from mild to severe depending on what mutations occur in the Hemoglobin gene and what variation or combination a person inherits.

Sickle cell disease is a very serious genetic disorder that causes multiple organ damage. Different types of sickle cell disease are more common among those with ancestral roots in certain parts of the world: particularly Africa, the Caribbean, Saudi Arabia, Asia and some Mediterranean countries (such as Turkey, Cyprus, Greece and Italy).

That notwithstanding, it is important to note that ANY human baby may inherit any type of sickle cell disease depending on what abnormal Hemoglobin genes each parent carries. Sickle cell is not exclusive to any racial or ethnic group. It is in fact a human disease.

Until next time, stay healthy and God bless!